Outerwear of the Fashion Plates.

‘Tis the season for frigid temperatures and winter weather advisories aplenty; when the importance of dressing appropriately for the weather is crucial for one’s survival outdoors. These days, cumbersome, heavy coats often damper our appearances with their muted tones and ever evolving synthetic fabrics promising a high-tech shield against the frosty air. While style often takes a back seat to functionality, the Pratt Institute Libraries Fashion Plate Collection shows us some of the most decadent of outerwear, created in the 1920’s Art Deco fashion. The plates appeared in the most influential fashion magazine of its time (1912-1925), the French periodical La Gazette du Bon Ton. Keeping warm never looked so good. 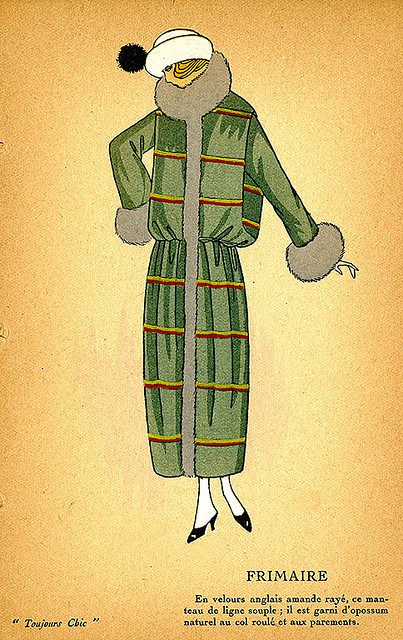 The Art of Correspondence. 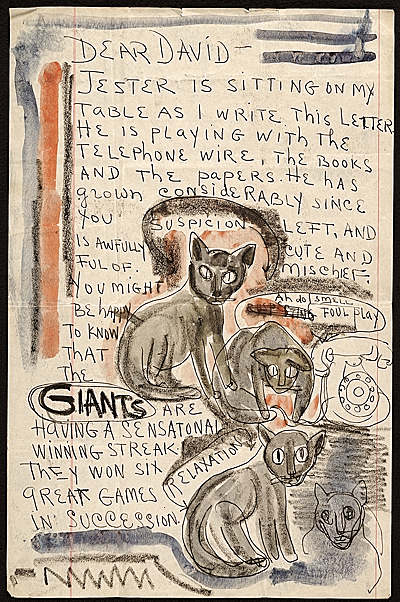 The Smithsonian’s Archives of American Art (AAA) is dedicated to gathering and preserving papers and primary records of the visual arts in America. It is the world’s largest and most used resource of its kind, with over 16 million items in its collections and growing. The AAA hosts over 110 fully digitized artist collections and extensive oral histories of American artists in the last 200 years. The essential components to an artist’s archive are typically correspondence, diaries, sketchbooks, photographs, printed materials, film and audio recordings. From browsing the AAA’s holdings, I became captivated with the art of correspondence documented within its collections.

From handwritten notes to carefully selected paper punched with typewriter keys, correspondence on paper is a dying form of communication. Our world has been overtaken by fleeting emails and texts consisting of impersonal and uniform fonts, whereas penmanship connects the style and form of written words to a person. Artists especially know how to craft correspondence to include creative visual expression for an even more enriched, clever message.  This has been captured in the exhibits A Thousand Kisses: Love Letters from the Archives of American Art and  More Than Words: Illustrated Letters from the Smithsonian’s Archives of American Art.

Another discovery within the AAA, was my fondness for Ray Johnson (1927-1995), painter, collagist, and correspondence artist. While Johnson’s collection is not completely digitized on the AAA site, his work can be seen in others’ collections, including correspondence, art, and articles on his death. Called his “performance art death”, Johnson committed suicide by jumping off a bridge in Sag Harbor, Long Island and was seen backstroking into oblivion. His dark humor and playfulness are pervasive in his art of correspondence. A transcribed interview with Johnson from 1968 sheds more light on his character. From the start, the interviewer begins to ask factual questions in order to establish dates and locations to Johnson’s life. Johnson finds this boring and rightfully becomes difficult while making accusations of a question-and-answer dictated conversation. When the interviewer asks Johnson when he came to New York, Johnson replies with “I’m inclined to think I’m not here.” Quickly after this head-butting of sorts, there is a pause in the interview. Despite this initial sparing, there is a lengthy dialogue that follows.

With both the beauty of correspondence, and my lack of personal communication on paper, I am compelled to turn more to the pen, rather than the keyboard, when reaching out in 2012.  If nothing else, my archive is lacking in this essential category.